The purpose of this feature is to allow game makers to create and deploy server-authoritative C# functionality within their games.

This feature eliminates the need to build, run, and scale a game server. Game makers can create server-authoritative logic in C# inside the Unity editor.

A common use case for the feature is covered in the guides. See Adding Microservices for more info.

Here a new c# server-side Microservice is created and exposes a method to be called by any c# client-side scope.

The source-code for both server-side and client-side sits local in your Unity project for efficiency and ease-of-use.

Imagine an in-game treasure chest ("loot box") containing a random prize for the player. The player is offered the loot box as a reward for progress in the game, opens the box, and receives the prize.

In a simple game with little or no back-end technology, the prize is offered, validated, and rewarded on the client-side. This is straight-forward to code, but is relatively insecure to any malicious hackers in the gaming community.

Now imagine some portion of the loot box code is moved to the server.

Now the the prize is offered, validated, and rewarded on the server-side. This is less straight-forward to code, but is relatively secure against any malicious hackers in the gaming community.

The benefits of a server-authoritative architecture are great. There are a few major ways to set it up.

A development team could write a custom back-end server setup. This is considerable time and effort, even for experienced teams. The team could choose an off-the-shelf solution. Beamable's Microservice feature provides power and ease of use.

Let's see how Beamable can help.

Imagine some portion of loot box code is moved to the server as a Beamable Microservice.

The prize is offered, validated, and rewarded on the server-side as a Microservice. The Microservice code sits in your Unity project along-side your client side code and is written in the familiar and powerful C# language. It is straight-forward to code and it is secure against any malicious hackers in the gaming community.

When a call to a Beamable service fails, it will throw a RequesterException. The exception can be caught using standard C# try/catch practices. In the example below, the call to SetCurrency will fail, and the catch block will capture a RequesterException that exposes details about the failure.

The RequesterException is the same type of exception that is thrown on the Unity client SDK in the event of a Beamable networking error. You can catch the same type and use the same error handling logic.

This section contains any advanced configuration options and workflows.

Beamable Microservices uses the industry standard Docker technology. Docker simplifies and accelerates your workflow, while giving developers the freedom to innovate with their choice of tools, application stacks, and deployment environments for each project. See Docker's documentation for more info.

Beamable handles all coordination and configuration of Docker including the beamableinc/beamservice base image hosted on Docker's DockerHub.

Here are some optional, suggested Beamable data types to use along with Microservices. The Microservice can take Beamable content as input and pass Beamable player state as output. Of course, game makers may choose whatever pattern helps the specific needs of their games.

As your project grows, you will have a larger amount of C#MS code and, as such, you might want to split this code into multiple C#MSs in order to organize it.

However, doing so has implications you should take into consideration when deciding things for your project. In many cases, it is possible to simplify C#MS and reduce the quantity without sacrificing functionality.

So, what can you do to share and organize code without incurring costs or adding complexity to your C#MS?

The end result here is that you have two ClientCallables in the same MyPartialMs but in separate files. The same thing works for utility functions and other similar things.

What should I use different C#MSs for?

Basically, the decision for this has to do with expected traffic hitting that feature/service and how it's resources are expected to scale. When reasoning about this, here are a couple of things to keep in mind:

To keep things a bit simpler, here are general rules of thumb:

If the above is true and you still wish to share code between two different microservices, architect your code and functions so that the parts that are worth sharing can be pulled into a separate AssemblyDefinition which both services reference. Keep in mind that you should only do this if the complexity is worth the code reuse --- over-using AssemblyDefinitions can increase overall project complexity for not that much gain.

All-in-all, this is a very game-specific decision. As such, our goal is to provide guidelines and tools to help you make that decision. Currently, you can see CPU/Memory utilization metrics via the Beamable Dev Portal's C#MS section and, in the future, we may track more specific metrics to allow you to make better decisions.

Development of Beamable Microservices within the Unity client is straight-forward and transparent. It is the ideal environment for development including debugging tools.

During development, the Microservice is run locally within a developer-specific sandbox, safely isolated from the production environment.

Using the Beamable Microservices Manager Window in the Unity Editor, the game maker can promote/deploy the Microservice to production. Choose the destination Realm and press the 'Publish' Button.

As needed, the Microservice can be rolled-back there as well.

Unity Publish Process
When Microservices and Microstorages are published from Unity, each services goes through a set of considerations and procedures. After each service has been finalized, a Service Manifest is written to the Beamable Realm that describes the desired deployment state. If the Service Manifest is not written, then no services will be updated.

Microservices may go through 3 phases before the Service Manifest is written.

Microstorages only need to be built, validated, or uploaded when publishing. They only exist as entries in the Service Manifest. Microstorages don't execute custom code, so there is no need for custom images.

Each Microservice is given a size profile upon deployment.

With the Portal, game makers can view and manage the deployed Microservices. 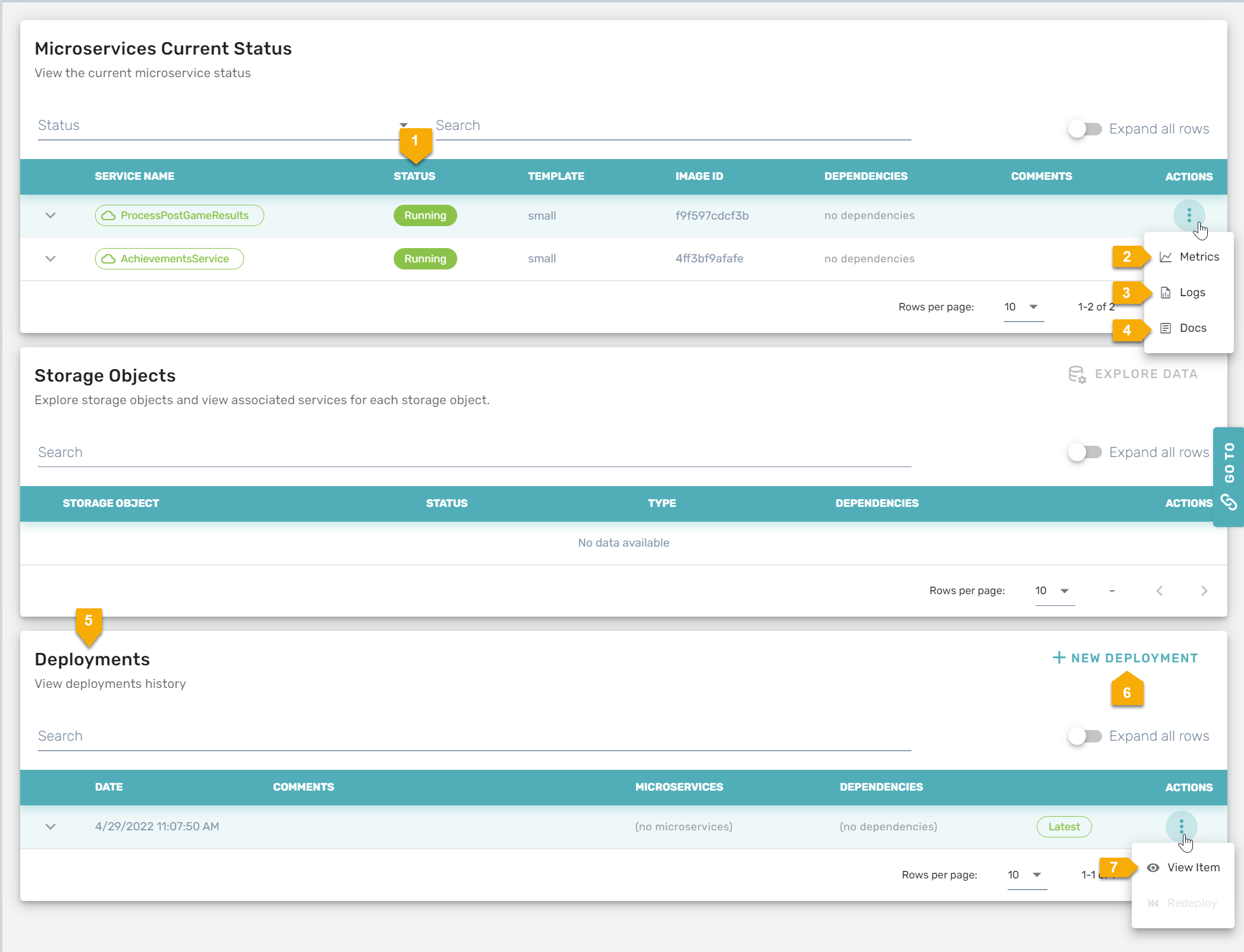 Making Beamable Calls From A Microservice

This gives the custom Microservice access to key member variables:

Below are two versions of the same method call with varied implementations. Notice that #2 handles more functionality on the Microservice-side and is thus more secure.

Here the eligibility of reward is evaluated and the amount is calculated. This assumes the client side will handle the rewarding of the currency.

Here the eligibility of reward is evaluated, the amount is calculated, and the currency is rewarded.

However, within a Beamable's Microservice, game makers must rely instead on Beamable's custom Serialization. This serialization is strict and has limitations.

When a [ClientCallable] method executes, there is an available class field, Context, that contains information about the HTTP request responsible for initiating the [ClientCallable].

It is possible that a request may timeout while it is executing. Long running loops are one example. In the code below, the while loop never completes, so the method never returns a value, so the request will timeout.

However, despite the request timing out and the client receiving an HTTP 504 error, the Microservice will still be processing the loop. This is a major performance problem, because the CPU will never yield control to other request executions. Essentially, anytime a request is caught in a non terminating loop, the entire Microservice performance profile suffers dramatically. It is a best practice to ensure loops will always terminate. In Beamable 1.9, the Context variable has a property, Context.IsCancelled, that returns true if the request has timed out. There is also a Context.ThrowIfCancelled() method that will throw a task cancellation exception. It is a best practice to always include the ThrowIfCancelled() method in long running loops, as exemplified below.

It is common to require a gamerTag for several operations that take place in a Microservice. The Gamer Tag can be acquired through the Context property as the UserId. The given Gamer Tag will be the Gamer Tag for the player that initiated the request. If no Authorization header was given to the HTTP call, such as calling a [Callable] method, then the UserId may be 0, implying there is no player associated with the call.

Sometimes, Beamable features require an Account Id instead of a Gamer Tag. If you need to access the Account Id of the caller, you use the GetAccountId function available from the Auth Service.

These headers are sent automatically from Beamable 1.3+. If a request is sent from elsewhere, such as Portal, or a custom script, the headers may not be present.

A breaking change is introduced in Beamable SDK v0.11.0. If you began your project with an earlier version of the SDK, see Beamable Releases Unity SDK Version 0.11.0 for more info. Otherwise, simply disregard this issue.